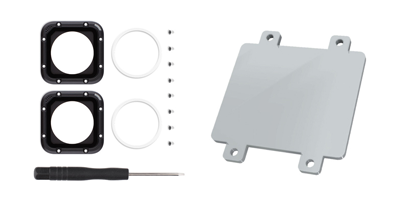 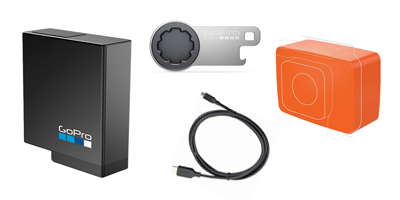 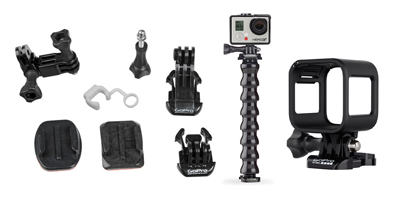 EARN 300 REWARDS POINTS ON THIS ITEM Ruggedized and ready for adventure, the GoPro HERO5 Black action camera can be taken to the skies, over rough terrain, and even underwater without flinching, recording 4K videos and 12MP photos along the way. The sealed rubberized chassis allows the HERO5 Black to be taken to depths of 33' without the need for an external housing. So whether your escapades take you to the lands of concrete, sand, dirt, snow, or water, the HERO5 Black is prepared to record with a single button press. Once you have finished recording, use the touchscreen to playback and even edit your footage right on the camera. Quick Features: • Photos: Up to 12MP, 30fps burst, time lapse mode, raw file option, Wide Dynamic Range mode • Videos: Up to 30fps in UHD 4K, up to 80fps in 1440p, up to 120fps in 1080p • Waterproof to 33' • Simple one-button control • Wi-Fi and Bluetooth connectivity • Advanced wind-noise reduction using 3 microphones • Voice control • Digital video stabilization • Rear touchscreen display • Automatic upload to the cloud • Built-in GPS • Video Recording Modes It's hard to speak about the versatility of the HERO5 Black and not mention the mounting possibilities available through the included and separately available accessories. The Frame is included with the HERO5 Black and not only adds another layer of protection, it provides an interface to the world of 3-prong accessories. To get you started, a mounting buckle quick-release for The Frame and two adhesive mounts (one curved and one straight) with quick-releases are included. Other accessories such as handlebar mounts, selfie sticks, suction cups, and dive housings for creative placement of the HERO5 Black are available separately. Not only is it more versatile than previous generation HEROs, it's also easier to use. A touchscreen graces the rear surface, displaying a revamped user interface, while the front screen combined with the top and side buttons offer a more traditional one-button control experience. If the camera is off, pressing the record button will power it on and immediately start recording. Hands-free control is also possible using the built-in Voice Control feature. Speaking simple voice commands can control various functions inside the camera, including start/stop video recording, photo burst, and more. Select the desired resolution to fit your project. Record in UHD 4K resolution up to 30fps or switch to lower resolutions such as 1080p and 720p for access to higher frame rates, more FOV (Field Of View) options, and electronic stabilization. In 2.7K widescreen and lower resolutions, for instance, narrower FOV options open up, including Medium, Narrow, and the new Linear mode (only available in 2.7K and 1080p settings), which corrects the lens's barrel distortion. All video recording modes can be as simple or advanced as you want them to be. If you only want to ensure that a shot is captured, auto-exposure is at your disposal. For those who are shooting less off-the-cuff footage and want complete control, manual control of exposure is also available. Audio for video is recorded using three microphones. In normal conditions, the HERO5 Black will process the audio for a stereo signal. If high winds start affecting the audio, the HERO5 Black can intuit which microphone is picking up the best sound and automatically switch to that microphone in real-time and filter out any excess wind noise. While the audio will only be in mono, you will know that you're getting the highest possible audio quality. Raw File Option: In addition to standard JPEG capture, the HERO5 Black can also capture raw images in the .GPR format. Raw images offer enthusiasts or professional photographers more flexibility after the photo is taken. Raw images can be processed after-the-fact for higher quality output. WDR Mode: Bridging the gap between JPEG capture and raw, the WDR (Wide Dynamic Range) mode is also available. If the scene has dark shadows and bright highlights, WDR mode will retain better detail in those areas. Burst Mode: Bursts of photos can be taken during high-action sequences to ensure that you capture the moment. The camera's buffer can fit up to 30 photos from a single burst, and burst durations can be set from six seconds to one second, effectively offering a 30fps burst of 12MP photos. Time Lapse Mode: Record clouds floating by, traffic snaking through cityscapes, or stars and constellations tracing their way across the sky with the time lapse mode. Set your interval from a picture every 1/2 second to every minute for different effects. Wireless and Mobile Device Connectivity Bluetooth and Wi-Fi connectivity enable the HERO5 Black to interface with mobile devices and wireless accessories. Free apps from GoPro, CAPTURE and QUIK fully integrate the functionality of your HERO5 Black with your mobile device. CAPTURE offers live preview, playback, and full camera control over Wi-Fi. QUIK is a quick editing platform for easy trimming and sharing of your recorded videos.

Living up to its action camera moniker, the GoPro HERO7 Black is designed to capture super-smooth footage of your latest, greatest, not-so-serene adventures. The HERO7 Black's HyperSmooth stabilization produces a gimbal-like flow without the added bulk of a gimbal. Camera updates include direct streaming to Facebook Live, an intelligent still photo mode, and stabilized time-lapse video. A vertical portrait mode enables you to add social media-style video and stills to your Instagram and other accounts.